Abbot is one of the Sierra Peak Section Emblem peaks and commands incredible views of the Sierra Nevada. In a clear day, from the top of Abbot one can see all the way to Mount Whitney to the South and beyond Tioga and Sonora pass to the North.

The climb of Abbot is mostly very pleasant. It starts with a short and beautiful approach, it has a nice snow climb on the Abbot Glacier and an exhilarating ridge traverse. Unfortunately, the transition from the Abbot Glacier to the ridge is on very loose class 3 rock with high risk of rockfall... one needs to be extra cautious in that segment.

Equipment: you should bring crampons and ice axe for the Glacier. A helmet is also highly recommended. Most experience climbers won't need ropes on this climb, but beginners may be intimidated by a very exposed knife edge ridge segment.

We started the trip by picking up the wilderness permit from the Mammoth Forest Service office. Given that this trip didn't enter a National Park, I was able to call 2 days in advance and request the permit to be left in the night box. From the Forest Service office, we headed up to the Mosquito Flat trailhead. At the trailhead, there is a primitive camp (pit toilet, stream water) for backpackers holding a permit for the next day. We met Ed and his wife at camp who came from LA. The weather had been quite unstable with afternoon showers and thunderstorms in the previous days. In fact, Ed got heavy rain as he drove to the trailhead earlier in the day.

On the following morning, we lifted camp and got our backpacking gear ready. While we were getting ready to go, we were approached by a volunteer ranger that checked our permits. I've been several time on this trailhead and my permit has been checked every single time (with the only exception of a day hike done in late October).

From the trailhead, we headed to beautiful Little Lakes valley but we quickly arrived to the turnoff towards Mono Pass. After a steady ascent on well graded switchbacks, we reached the junction of Mono Pass and Ruby Lake. From there, it was just a few minutes to the lake. We crossed the outlet of the lake and we did a short segment of boulder hoping by the shore of the lake. At the top of the waterfall that feeds the lake, we crossed the creek and continued on the easy right side to Mills Lake. At Mills Lake, there are fine campsites on the hill just above the lake. Further up the drainage, there are bivy spaces, but not real campsites.

After getting to camp, we started seeing menacing clouds that had brought rain the previous days. We were concerned about thunderstorms so we decided to just chill out in camp and not to try Mills. After a couple of hours of "chilling" out Ed and me were getting cabin fever, so we decided to go "exploring". The weather was threatening but stable, so we easily convinced Peter to come with us and we started heading up towards Mills. We made fast progress by staying relatively high on the slabs and avoiding the boulders and snow fields further below. Many times we thought that we were going to cliff out on the slabs, but there was always a way to get through. Eventually, we ran out of slabs and we headed up the scree towards Mills Chute. At this point, the weather started to deteriorate, but we decided to push on. By the moment we got within 100 feet of the chockstone blocking the Mills gully, the weather was definitely taking a turn for the worse, so we stopped and discuss what to do. Peter took a strong stand against continueing, while Ed and me were hesitating about it. Eventually Peter decided to leave which pushed Ed and myself to do the right thing and we returned to camp. "Unfortunately," the storm never materialized, and even though we got a few rain drops in the way back, there was no lightining. As we were coming down, we heard a big noise and we saw a huge boulder come from Petit Griffon Pinnacle all the way down to the Glacier. It was quite impressive and it brought quite a number of smaller rocks with it.

After returning to camp, we had time to study the route up Abbot. We saw a party coming down, so we learned where the right place to cross the glacier was. We were all surprised about how high the crossing was. It's hard to describe where to cross as each year the snow will be different, but basically you want to cross just below the point where the snow gully doesn't widen anymore. 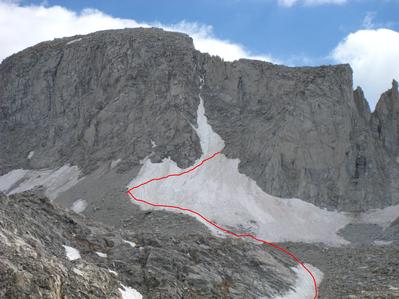 On Sunday, we woke up at 5:30am and we headed up the slabs to Abbot. This time, instead of staying as high as possible, we dropped onto the snow as soon as it looked like it was a relatively continuous path to the Glacier. The snow was very hard, so we put crampons on. This was a very dry year in the Sierra, so there was not much snow. So we had to do some segments on rock without removing the crampons. Doing this mixed rock/ice was a lot of fun.

Eventually we got to the bottom of the glacier where the band of rocks fallen from Abbot and Petit Griffon stopped. We passed this rock fall area fast and reached the left side of the Glacier. Ed, his wife and me, decided to remove crampons and climb on the lateral moraine, while Peter continued on the snow. After climbing as much as possible on the moraine, we stopped to put crampons on and wait for Peter. From there, we traversed to the other side of the glacier on relatively steep snow and ice. I wouldn't do this traverse without ice axe and crampons unless the snow is extremely soft. 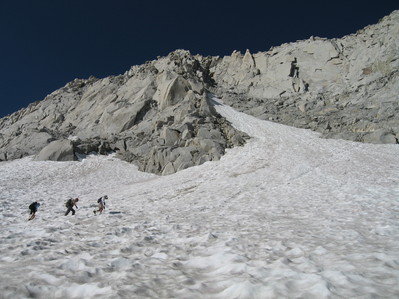 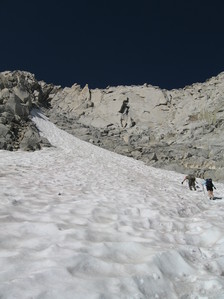 After traversing (and going a bit up), we found ourselves on the other side of the glacier. There, a dangerous mix of sand, ice, snow, and water transitions to loose Class 3 slabs. After getting on relatively "solid" ground, we took off our crampons and ice axe and started climbing. There are many routes going up here, all equally hard (class 3) and equally loose. We just picked a reasonable line diagonally towards the ridge. There are many ducks in this area that help with route finding. As we went up, the rock became more solid which was a relief. In the way up, we saw a pair of ice climbing boots hidden under some rocks. After some debating, we decided to leave them as they were, in case the owner was doing some non-obvious route and he or she was coming back to them. 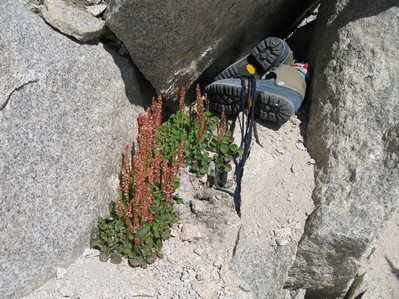 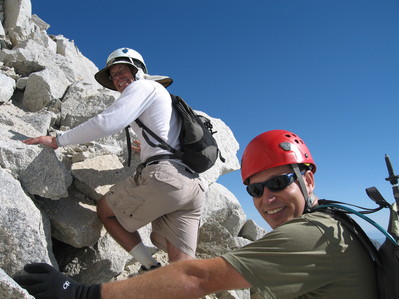 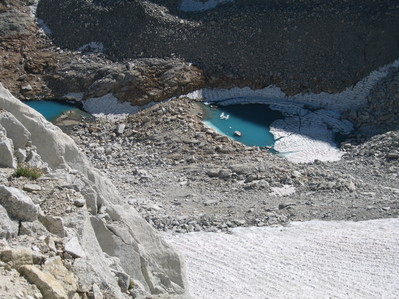 After we gained the ridge, the route to the summit is pretty obvious and we followed the ridgeline to the Summit Plateau. The ridge is mostly Class 2 with a few segments of Class 3 and an "airy" knife edge. The first obstacle, a large boulder on the ridge, was passed by using cracks and slabs on the west side (Mills Lake side). At the end of this, we found the "airy bridge" a sloping, narrow slab with lots of exposure. It's just a few steps long, but pretty scary. After that, there is another obstacle, a cliff, that we passed by heading over the ridge and to the East side. This traverse looked hard, but if the route is chosen appropriately, it's not harder than Class 2. After regaining the ridge, the route quickly becomes Class 1 on the broad plateau to the Summit which was farther than it looked. 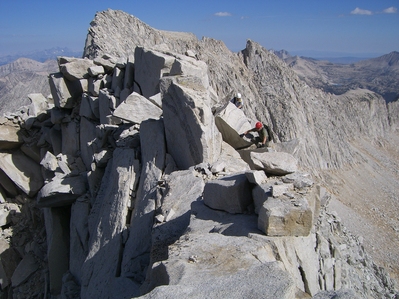 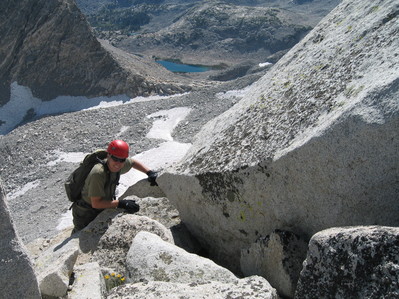 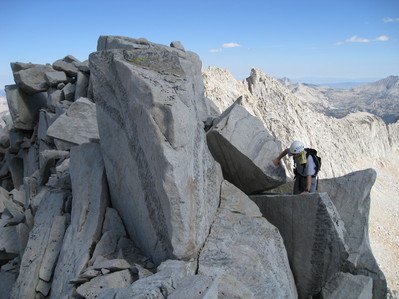 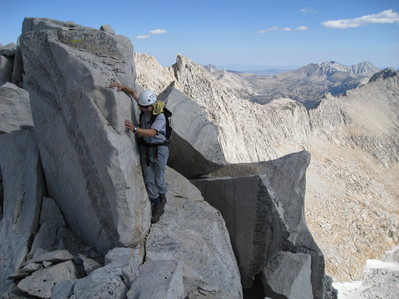 Picture by Arturo Crespo
Peter on the airy bridge 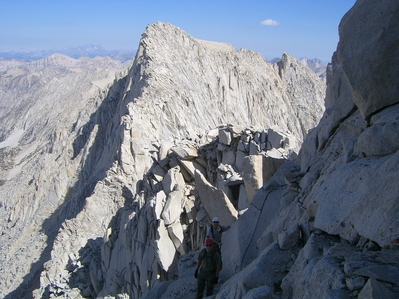 At the top of the Summit plateau, we found the silver container and a half full register (where some people expressed their strong opinions about full registers belonging at the top of mountains and not a the Cal Library). After enjoying the views and taking the obligatory summit pictures, we headed down, retracing our steps. 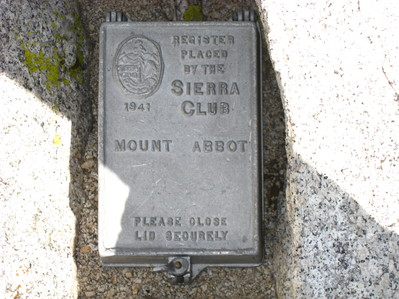 Picture by Arturo Crespo and Peter McColgan
Register and Peter, Arturo, and Ed at the summit

As we were coming down, we noticed a party of 3 coming up the Glacier. We accelerated our pace so we could meet them on the transition from the Glacier to the rock, but unfortunately, they reached the transition when we were going down the loose class 3 ledges. We communicated with them and they gracefully agreed to seek cover and wait for us to descend. Sure enough, as we started descending Peter Bomber McColgan, dislodged a big rock that rolled all the way down where the other climbers were a minute ago. We continue going down, trying hard not to kick rock but this turn into an impossible task so we were glad the other climbers were in a safe place. After we reached them, we exchanged beta and asked them to wait for us to be on the glacier so they didn't kick rocks on us. After we were out of their line of fire, they starting ascending towards the summit. 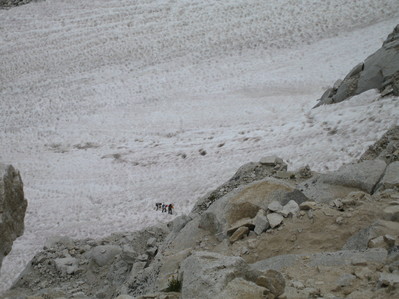 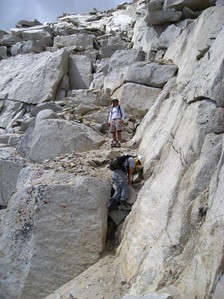 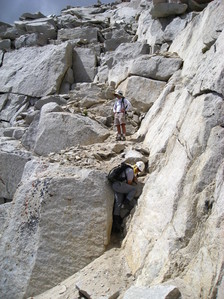 The rest of the descend was uneventful, we decided to stay on the Glacier for as long as possible, so we return where Ed's wife was patiently waiting for us. She put crampons on and we did a mix of ice and rock to the last snowfield above our camp. From there, we took an alternative route through one of the upper Mills Lake, back to our camp. After picking up camp, we started the short hike to the trailhead and the long drive home. 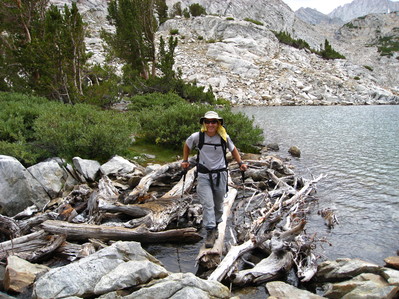 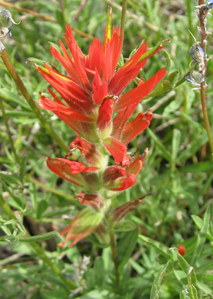 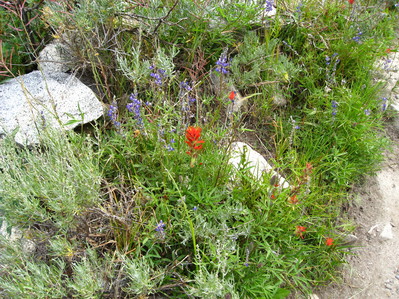 Picture by Arturo Crespo
Beautiful wildflowers
Do you want more Pictures? Follow these links:
All of Arturo's, Peter's and Ed's Pictures
© 2007 Arturo Crespo